Math is fun and even addictive. Don't you all agree? I certainly think so. It has been developed by humanity since ancient times, born and raised in places such as Greece, China, Arabia, and India. Japanese mathematics from the Edo period were of considerably high level as well.
It is a skill born of the brain. At some point in time, the human brain became capable of mathematical thought. It holds the same roots as using language, creating concepts, and examining relationships. Humanity has developed this ability as part of social living. When working together with a partner, the mind needs to communicate, and in order to do that, it must know one's own intentions, while also understanding the intentions of one's partner. The mind, consciousness, language, mathematics, etc. are all products of the same brain.
Mathematics were established and developed by civilized societies as a system of intellect. Thinking mathematically is fun, but there are still many in the world who hate math. Why could that be? Well, topics of study are set every year, and math has become a fixed educational subject, for which students must be tested. Perhaps this is necessary as a social system, but it has watered down the fun of thinking, and requires rote memorization of problem solving strategies, which are nothing more than tricks for quickly answering questions on a test. The brain hates this sort of memorization but loves to think. There are a lot of misunderstandings about math, such as being only for pure mathematicians who do it for a living, and maybe just a subject that others need to endure for passing tests, or maybe an efficient subject for earning points from time to time. Some famous people have declared that there's no point in teaching solutions to quadratic equations, etc. because we never use that sort of thing in everyday life.
So then, is math just for taking tests? Certainly not. The joy of thinking, using reason to organize matters, deduction, and problem solving are all rooted in human nature. Even those who lean toward the sciences, humanities, or other fields outside of math need to be grounded in mathematics, and it is useful for them to understand that math can be fun. This is a culture created by humanity. Following in the footsteps of Dr. Shin Hitomatsu and Dr. Jin Akiyama, I was appointed as the third president of this institute. Although it is quite a heavy responsibility to take on, for someone like me who loves math, it is truly an honor to hold such a gratifying position in my later years. My goal is to grow closer to all of you, as kindred spirits who share a love of mathematics

Chairman of The Mathematics Certification Institute of Japan Professor of Teikyo University, Faculty of Education, Department of Elementary Education

The Mathematics Certification Institute of Japan (hereinafter "the institute") has now been administering Suken for 20 years. By looking back at what has been achieved in this period, and looking at our prospects for the next 20 years, we are devoted to improving the test in many ways, to spark an interest in people's lives for mathematics, and to aid them in further improving their math abilities. One specific way of doing this is to offer a certification program that is widely accepted as a highly-reliable and useful indicator of learning. In order to offer a system that is easier to understand, which makes test taking easier, the Suken system was revised starting with the test administered in April 2011. Soon after, the knowledge gleaned from this certification program went back into the community on a wide scale. There is currently a lot of interest and expectation regarding the institute, and in order to loyally respond to this attention, we are trying to create and develop a useful program for our test takers and national citizens on a whole.
I have been involved in surveys both within and outside of Japan regarding arithmetic and mathematical research. As a result of these surveys, we have come to realize the interest that Japanese children have in other subjects, and that a significant portion of people on an international level hate math. However, at the same time more than 80% of children asked said that they would like to get better in math. It hen realized we need to meet this sincere desire expressed by so many children to learn more about math. In order to achieve this, it is imperative for us to respond appropriately, with schools at the foundation, together with society as a whole.
Math is the foundation of thinking through matters to make sound judgments, and to explain them accordingly. It is also garnering attention as a language. This is especially clear within government guidelines for elementary school, junior high, and high school curriculum (revised in 2008, 2009). For years of Suken practices, the institute has appealed to the importance of fostering the ability to think mathematically when making judgments, and their ability to explain their conclusions accurately. In order for our international society to survive into the future, I believe that mathematics and reading comprehension play an especially important role.
A famous German mathematician in the early 20th century named Felix Christian Klein (1849-1925) is known as the father of today's international conference on math education. One of his famous quotes is that "formulas are only silent, they are not asleep." When substituting "math" for "formulas," there is an implication that they are related. In other words, math will always respond if one makes an effort to seek it out. Without a doubt, the question of whether or not math is our ally, whether or not we are familiar with it, and whether or not we are able to utilize it, is important in our survival into the future as a knowledge-based society. The institute continues to make improvements to actively contribute to this goal.
We at the institute are grateful for the warm guidance and encouragement we have received from all of you and ask for you continued support. 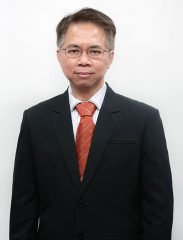